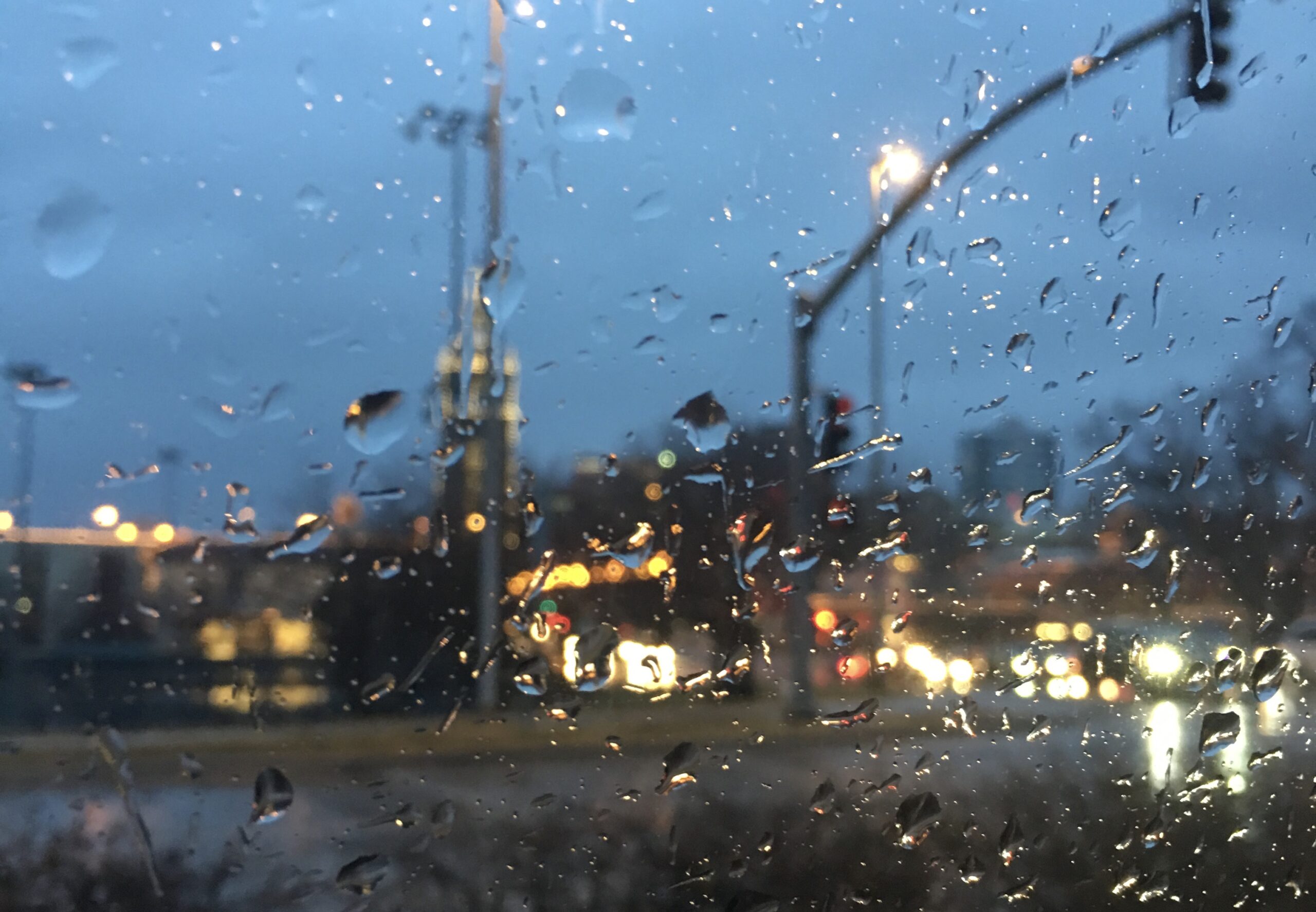 Across an expanse of warp and woof, the early grey sits. Going nowhere.  Behind, a darker stretch of sky.  Grudgingly, eyes pry themselves open.  It’s 7:15.

I can smell rain – ok, not yet raining, but it’s gonna.   Not too long, now.  Letting my eyes close, I try to slip back to Morpheus.

Tep, tep, tep.  There it goes again, the recurring, three-tap burst.  Steady as a street-worker.  Up and at it early enough to aggravate the still sleeping.   Three days, now, this woodpecker working the spruce just over the fence.  Tep, tep, tep.  A pause, then again.  Insistent, pillow-muffled rapping systematically working the tree for insects and larvae and sap.

Not as caustic and disruptive as the thump-thump of a teenager’s car stereo, overloud and rattling the casements.  There, nonetheless, denying me a return to sleep.

Then, a decided rumble, distant over the bluff but heading this way.  A throat-rumbling grumble held for a long note.  Joining in, the faintest cathedral tonggg from the new chimes, their pipes dolorous, stirred ever so slightly by the front-wind.

In the kitchen, yellow light. The aromatics of arabica in the drip pot.  Both pushing back against the grey of the heavens, against the muted emerald of the lawn, piebald with patches of straw covering new seed set to germinate.

There’s little more pleasant than a slice of toast, hearty and seeded and slathered in butter.  Perhaps a shake of garlic powder and a sprinkling of cayenne.  An egg, soft-boiled, its yoke still nearly slurry.

Again the long grumble of thunder in the distance.

The window above the sink is open. I stand for a long minute: looking, smelling, listening.

Rona day’s are a change-up:  Quieter.  Noticeably less clatter of internal combustion engines, scurrying on their missions of self-branded importance.

It’s been noted that humans, en mass, share much with ants, with bees.   Caught up in duty, indentured to industry and its constant doing.  Not so much these last weeks.  The temp’s been turned down, the pot has forgotten its urgency to boil, boil, boil.

Seated on the deck, up under the eves and mostly sheltered from the steady, mist sprinkles (if it grows much heavier I will be forced back inside), I think about things.  How the new rhythms of waking and sleeping, the slow burn of tasks and duties, defanged of their hurry, forgetful of their dash for ever more consumption.

It’s been an adjustment.  My hunting and gathering has changed.  I’ve needed to re-learn some things.

For years now, I’ve followed self imposed rules:  NEVER spending more than $40 in any one trip to the grocer.  Mitigating some of the waste of overbuying.  The required frequency demanded by this one rule, allows for more produce, more close-to-the-dirt freshness, less chemicals.  Less packaging than the pre-prepared foods lurking in the center aisles.  Rules that require forethought before heading out:  what to make for dinner, lunch, today and tomorrow. My old rules also allow for more human interaction.  Regular, repeated, frequent returns allowing for more familiarity with the ‘incidental’ cashiers, sackers, shelf-stockers and specialty counter staff of the bakery and meat counters.  Faces that otherwise, one would most likely avoid seeing enough times to actually become familiar with.

The Rona has shoe-horned me into routines more culturally prevalent -the ‘big shop’.  And yet, the past frequency that makes of even incidental social interactions more ‘sticky’, a touch more interpersonal in its interactions.  A nod or a word still clings to more weight because of all the days that have come beforehand.  A half-smile, still knows that one day things will return to more normal ways.

Odd too, how the relaxing of day-to-day schedules seems to bleed the hours into each other.  Eight hour days, class schedules, weekends, vacations…. Fewer hard lines of demarcation, now.  The pressure has been let off a tad.  And yet, things in need of doing remain.  Only now, like laundry stacked across a bed, not yet hung up, more relegated to their appointed drawers.

So too, there is a lessening in specific minutes dedicated solely to relaxation, unwinding.  The hours run together, fuddled.

And so,  today I will force a break.  Deliberately make a point of doing nothing.  Perhaps a few pages in a book, give myself over to a nap.  Putter in the kitchen without a plan — ponder options and then yield to nibbling on cold leftovers right from the fridge.

I’ll blame it on the overcast, the rain and grey skies.  Hell, even the Rona …. There’s enough blame to be shared around liberally…