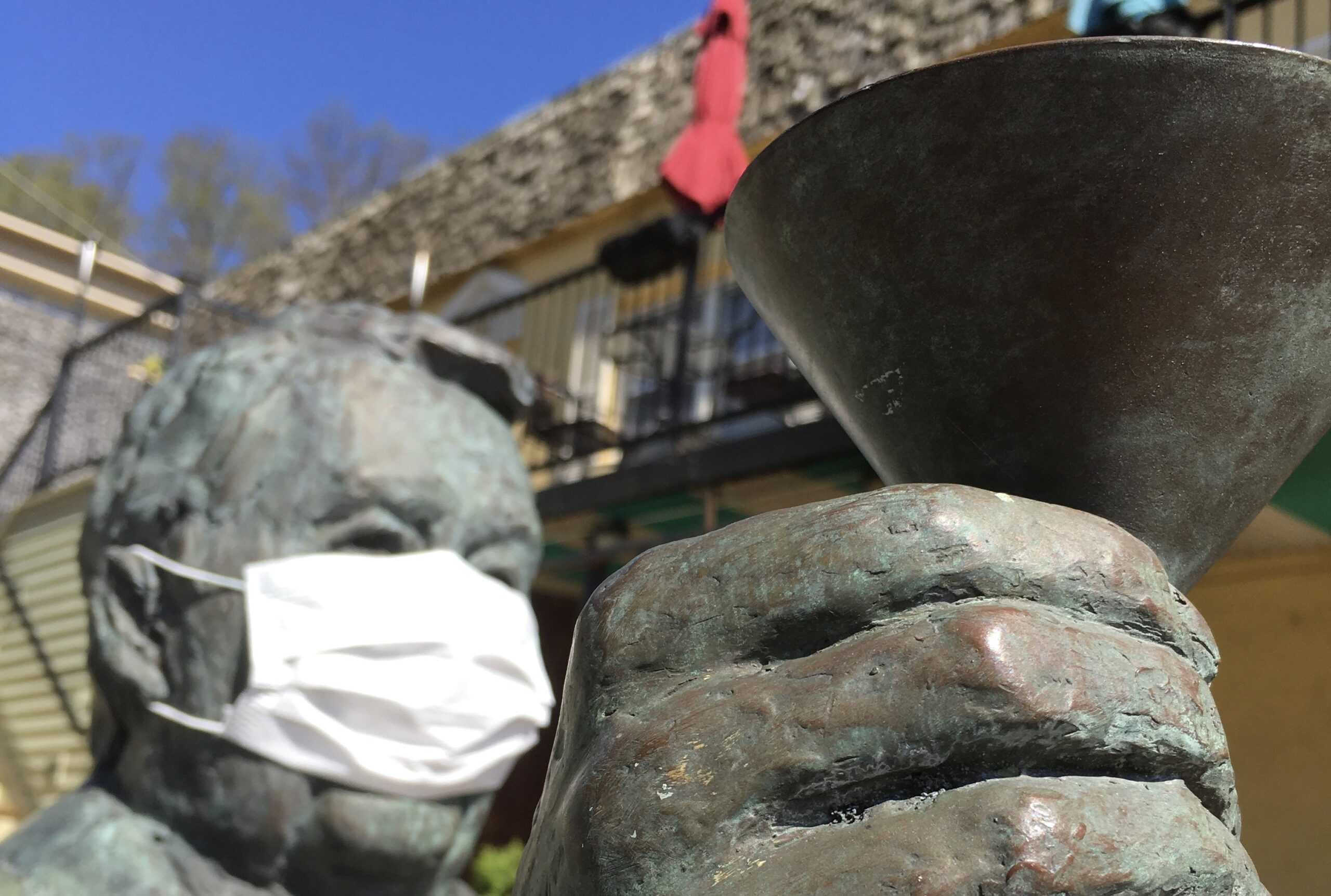 I switch from one bench to the adjoining one, following the sun.  After 5pm, mid April, and it’s 42 degrees.  While 42 may be the answer to Life, the Universe and Everything, while Alice may grouse and complain when rule 42 is applied to her… 42 degrees also makes for a brisk sit on a windy afternoon.

Perched above me is the statue of Bill Grigsby. A wineglass in his outstretched hand as if presenting a welcoming toast. Cast in bronze. Frozen in time. Rigid in the 42-degree wind. Grigsby has been known to seasonally sport a jaunty scarf, a Royals’ cap, a Santa hat, a Cheifs’ jersey … whatever decorum demands. Today, he wears a white surgical mask — these are the Rona days…

And I am but a displaced Brautigan.  A doppelgänger of he seated beneath that statue of ol Ben in Washington Park.  That was 53 some-odd years ago.  Across the years, statues tend to remain — unless, of course, they are toppled, pulled down like Saddam or Stalin by angry mobs. Unless blown to bits by the Taliban or moved somewhere less public like some northward-facing, gentleman slave holder…  Their durability, in light of their fabrication, in light of the people and events they signify, understandable.  It’s we the living, the still above ground that so conspicuously pass unheralded.

And Parks, even wee urban retreats, patches of repose like Parkville’s Pocket Park, serve similar needs.   From the deer parks of the gentry to university quads to the gated, key-locked squares accessible only to residents of adjoining tenements. Whether fashioned by Olmstead or designated for posterity by Teddy Roosevelt (’til a money-grubbing administration sells our children’s birthright for a bowl of gruel to some wealth-extracting fossil fuel concern, unless some bankruptcy king erects an eyesore with accompanying golf course so his buddies will never have to step away from their room service, mini bars and rent boys to actually step out into its magnificence).

KC has some truly fine parks: The rolling, manicured urbanity of Loose Park offering up a dozen different vistas. 1,800-acre Swope Park – more than twice the area of Central Park, three times the size of London’s jewel of green space: Hyde Park–Kensington Gardens. I was constantly startled when walking there by the nekked bathers. Summer or winter. Young and old (though predominantly old — sorry all my prurient peep-show enthusiasts) they would descend from the skyscrapers lining its perimeter, strip down and wade into the Serpentine — a hell of an eye-opener for a 20-something American living abroad.

Swope is just so damned vast. It harbors soccer pitches, bike trails, ball diamonds and basketball courts, fishing ponds, the Zoo and one of our nation’s premier amphitheaters: the Starlight. A river cuts through it. Swope even has its very own, privy dive bar, tucked away at its center. Back in the day, a buddy of mine, following in the footsteps of T. Corraghessan Boyle’s Felix Nasmyth, grew weed on an enterprise scale deep in the wooded slopes of Swope.

There’s a multitude of boutique, quiet, out-of-the-way green spaces.  A overgrown court behind a church, prone to a decent breeze, its paving stones cool to the feet. Maybe a single bench sat beneath a stately tree, or off a little-traveled cul de sac. Or an over the edge retreat, nearly out of sight, yet with a spectacular view of the downtown skyline. Many of us have a favorite about which we whisper nary a word, desperately trying to keep a lid on how many people know, lest they… we… lose the privacy and solitude.

Add to the mix – I. Me.  A writer.  An observer and erstwhile thinker. Often a critic of the landscape and culture around me.  The newest incarnation of that age-old American tradition of contrarian:  Will Rogers, fellow Missourian Mark Twain.  Am I really all that disparate from Brautigan?  From old Ben? Or, for that matter, Bill Grigsby.

A few minutes ago, my friend Kasey stepped to the curb. Dressed for labor and sporting her signature smile — just a hint of orneriness at its corners.  It was our second try, our second go at what must look to some like a weird, suburbanized drug deal:  me in my face mask (a repurposed Crown Royal sack) and rubber gloves.  A plastic bag, sealed, passed between us.  The exchange made, right there in broad daylight — the bag’s contents for a few, folded bills.  Neither of us even pausing to count them out.

How different is it, really?

The baggie does contain a ‘drug’ of sorts:  Powerful — a concoction assembled by the alchemists of thought and diction.  Its contents, perhaps dangerous to the established order of things. Certainly offering those who partake, escape, a few hours of respite.  Books.  She had come for, and I had brought her books. Valuable? Helpful? Pleasing? For a certain kind of person: essential.

Parkville and Kasey are long acquainted.  I sometimes bump into her at the now-shuttered Parkville Coffee (here’s to you, Leon and Cricket and Noah — to you and all the others who serve up coffee and muffins, now struggling to wait this thing out…).

Those hurrying past us, en route to Friday curbside pickups of Stone Canyon pizza — a weekly treat for the kids quarantined at home — have no inkling that Kasey is a native. That her family long occupied houses nestled in the hills and folds skirting this downtown.  They’ve no idea that it is this woman’s voice they hear on their radios come Sunday mornings.  Spinning Americana and folk, telling the stories behind them, herself a writer and singer of the type of songs she plays.

The sun slips below the hill.  The chill grows uncomfortable.  Time to head home.  By the time I get there, Jo will be home from work. Leslie will be back with Riley bringing a box of Slap’s BBQ.  Something we’ve never tried before — our treat for the week.

The car idles in the parking lot.  I’m early.

As I wait, I switch on the radio.  Radio is an integral part of my Sunday ritual.  I look forward to this goldilox-hour as I make my weekly drive in to the shop.  There’s a trifecta of good programming on the dial at this hour:  River Trade Radio on 90.1; the Revival Hour on 909 the Bridge and Live from Here over on Kansas Public Radio.  I switch between them along the xylem and phloem of my whim.

Today, head on the headrest, I close my eyes, slip into the current of music.  David Hidalgo singing his tender, plaintive: “will the wolf survive…” Its tone appropriate to the times in spite of the morning sun.     A shadow passes across my eye lids and I start.  Did I doze?  Jason, sporting his red fleece and blue bandana, is pacing outside.  We head over to the old quarry, now filled in and carved with trails. Its a change-up from the monotony of the Levee, from the growing numbers along the main trails of English Landing.

The day has taken a turn for the warmer and we are overdressed.  Yet, up in the trees, outer layers dosed with Deet are tolerated as we move into tick country and tick season.  No need to compound the Rona with a pile-on of that other import from a costal town: Lyme, Connecticut.

Back at the car, I shed the hoodie, the shirt, the socks and mud-clogged trainers. Change into something less tick-infested and deet-fogged. I draw quizzical glances from the influx of people now filling the parking lot.  It’s a beautiful day and people are restless, antsy after weeks of sequester, after a long winter.  This is but a semblance of normalcy — if one can count walking in face coverings and keeping 10 feet distant.  The professional blatherers are on about  ‘opening back up’ the country.  A quick cruise around the ethersphere indicates that this is contrary to advice from the medical community at large.  Which value set will prevail?  The pressures are real: isolation, household income, tedium…  Yet, I’m betting on Mammon — he’s an old god and a demanding one.

A small, grey 4-door over to the side. A black SUV parked sideways across the lane, doors wide open. Three more cop cars pulled in behind — I confess a gawker’s unease as I pass. That’s when I note the crowd of flack jackets, the four civilians. Congregating along side, they are laughing and talking.  One waves.  Odd.

We have the park to ourselves, I and a buddy. Masked and walking on either side of the lane, our voices grow hoarse from speaking loud enough to be heard across the width of tarmac.

A couple miles on, we happen across an elderly couple. They too wear face masks.  Walking slowly side by side, they wave feebly. Too worn out to make much of an effort.  We step off road, out into the verge to pass. Most likely they live together, live in some townhome close-by.  No need to socially distance from each other. They’ve shared the same air, the same bed for decades.

Once past, we step back up onto the road, pick up our conversation where we left off. Today, back and forth trying out narrative twists, trying on different turnings to see if they hold together when discussed.  Two writers, making use of the ‘extra’ hours trying to write something new. The walking helps.  The talking helps.  The former releases dopamine, keeps the blood flowing through the physical animal.  The later — as the good book notes:  as iron sharpens iron…

In the distance, out across the field, there’s a family. A mom and dad taking advantage of the near-empty out-of-doors to get the kids out, burn off a little steam with a round of Frisbee golf.

Twice more during our hike, we are passed by the parade — the sedan closely followed by a line of cops.  A sudden burst as the car speeds off.  The blurp-blurp of light and sirens.  A short chase and a forced stop.  Repeat.

Odd what one gets up to in these days of quarantine. Police running drills in a Park. Less demand for revenue-enhancing interaction with the public.  Hours in need of filling.  Aaand so, training. Drills along the deserted park roads. Two guys walking, talking loudly. Could be worse…