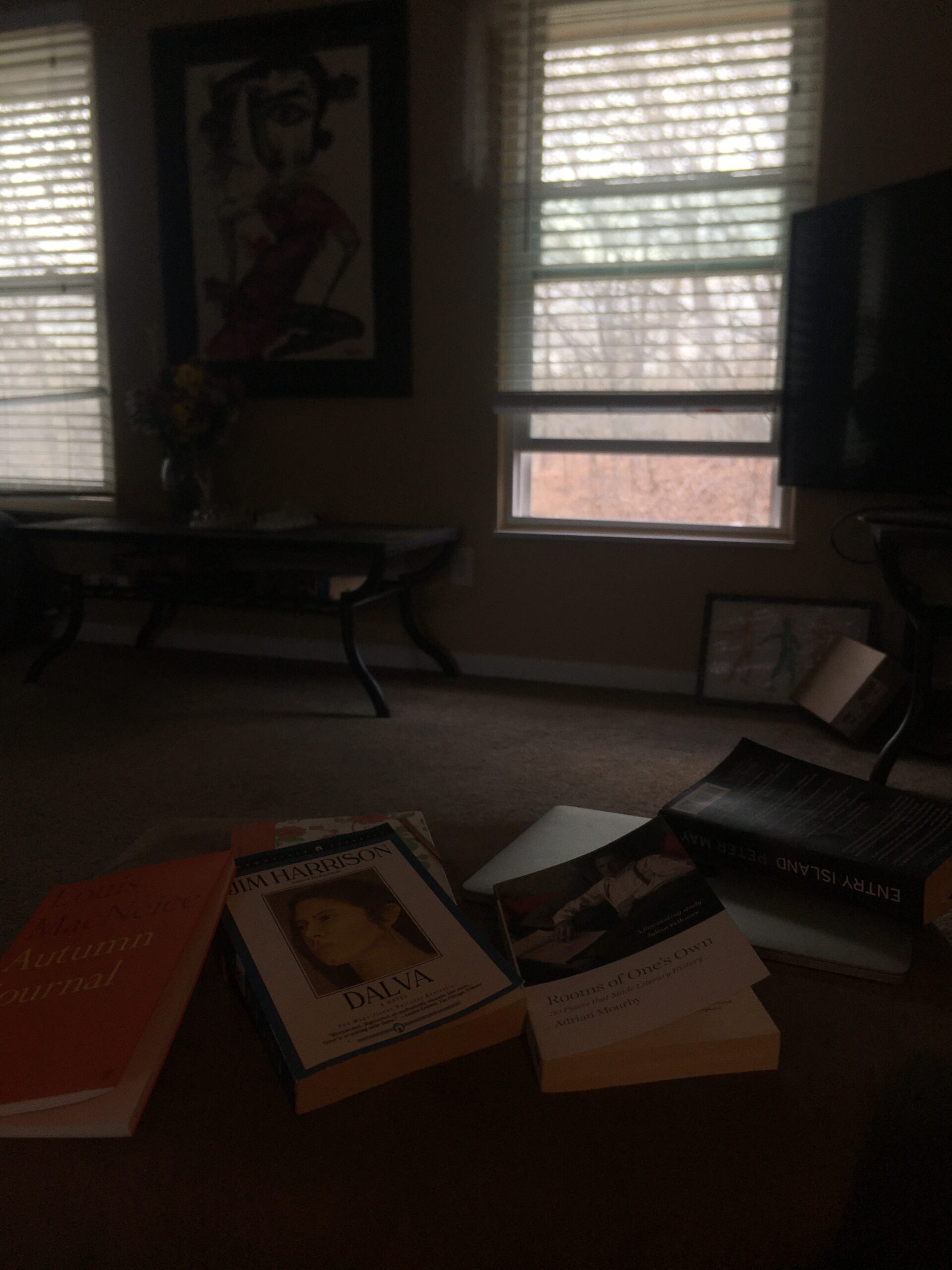 The second finest season of the year, and here I sit — hobbled.

A regimen of steroids and antihistamines (with which I tread lightly due to a low-grade allergic reaction resulting in hives) have curtailed the extreme reactions of the last decade-and-a-half since the adult onset of symptoms.  Still, it is a frustrating.  I want to open the windows.  I want to putter in the garden. I want to be out-n-about, in general.

So, I sit facing the window. The wood beyond. Enjoying the creak of the door frame, a crustacean’s crawl of last fall’s leaves scurrying up the road.  Like a lion, March comes… The incessant tolling of the wind chimes that hang outside the kitchen window add a nice touch.  Theirs is not a dolorous sound, per se — though, as with most bells, there is intrinsic sadness.   Their tenors too high, the frequency of their step & reel, too sprightly to entertain much moroseness.

I think I will do something I seldom do — just take the day.

No ta-do lists. No errands.  Ok, perhaps a little effort in the kitchen (a mess of chicken, having abandoned its 24-hour brine for a more luxurious buttermilk soak, percolates in the fridge).  Tonight: there will be breading and frying!

There is a reasonable stack of books by the chair:

I am throwing in the towel on Peter May’s Entry Island after only 67 pages.  I never used to do this, but with the fleeing years, I find I have less truck wasting time over flailing narratives.

Police procedurals are nearly always pedestrian anyway… Yet, May’s Lewis Trilogy, while each containing some huge, grating flaw, captured the bleak yet beautiful, worried, coastal life of the North Sea — I could overlook its flaws.   With Entry Island May seems to be phoning it in — as if tossing in a bunch of street names and compass directions could, of themselves, add veracity to a limp yarn.  And there is a weak-tea ploy to build sympathy, reveal character via a clunky, half-hearted back story about a cop-on-cop romance… meh.

As the fighters of Foo are want to say: I’m done, I’m done and I’m on to the next one…

Adrian Mourby’s Rooms of one’s Own, bite-size tellings of 50 authors and the particular rooms in which they wrote, promises a peek behind the curtain at a slew of famed wordsmiths.

I also intend to forage further into sections 3 & 4 of Louis MacNiece’s Autumn Journal.   So far it is proving the most accomplished long-form poem of the last 75 years.

And — if I can muster the attention — a few chapters in the late Jim Harrison’s Dalva.  Having tackled over a dozen of his novels and novellas (Legends of the Fall the most recognized), as well as several books of his poetry, Harrison retains his seat as my go-to American author of the late 20th century.

In its first few pages, Dalva was so exquisite, that I had to keep setting it down to get up and pace about the room just to let off my euphoric jitters.

Anyway, hope ya all enjoy the day….  The weather guru’s are promising thunder boomers later this week!