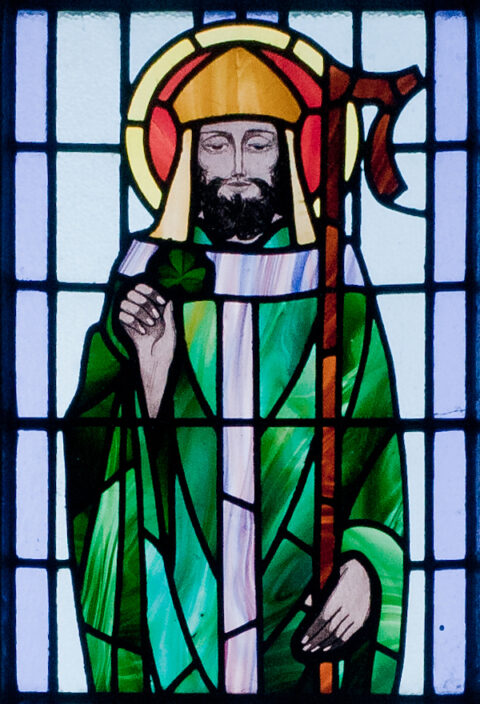 March 17: two day’s beyond the ides, a week before the eclipses.  St. Patrick’s (and it’s  Paddy’s — NOT St. Patty’s) day.  While these days, I list more toward older takes and understandings (though here too, not much for the cartoonish or new-age-y stuff).  Just a more earth-centric acknowledging of the great cycles.

I do find it an oddity that a Romanized Saint, a carpetbagger with a kit-bag of Papal spirituality-cum-Brittany has, some 1,600 years after the fact, become an icon of the Irish Celtic descendants (though the Irish take on Catholicism offers an interesting variant, not having been completely suborned to the aesthetics and emphases of imported strictures).

This year, the Rona seems to have tempered much of the distemper that seeks out any excuse for over-indulgence and public excess.

I recall, one St. Paddy’s, into the shop early so as to still find a parking ahead of the influx of revelers.   [Friday/Saturday jubilees are always the most intense].  Clusters of boisterous celebrants done up in green were already commencing the mile hike to the parade route.  I was preparing to push the book carts out onto the sidewalk when a man, a beer in each hand, darted into the intersection of 39th and Bell where he dropped trou and began to take a piss.  All the while, singing.     9am….  The worst usually staggers in later in the day, following all the Kaylee (Cèilidh)…   civilians, pfft.   I dread working it (along with New Years Eve and the more recent contender: Cinco de Mayo).

I do miss the music, though. Made by breathing people gathering in a room.

Yet each year, I find myself indulging in a bit o holiday-making, a tacit recognition of the predominate genealogical strain of my ethic-cultural slurry.

There’s usually a slab of slow-roasted corned and peppered beef steamed above black beer.  Colcannon.  Roasted root veg, and a dram (or three).

There’s also usually and a viewing of The Quiet Man.    Yes, yes, I know….   Americanized…  a touch off-color beneath the klieg-lit glare of today’s more sensitive understandings where all is scrutinized til the whole must face down a less-than-subtle demand for repudiation in hopes of recalibrating a wrong.

This past week, I was reading Lous MacNeice’s long poem Autumn Journal, set in the fall of ’39 just prior to England full-throttle entering the world war.   I’ve been taking my time.  Giving myself a day or two to digest each section.  Indulging myself, flipping back to previous pages to re-read.  If caught up, even to whisper, offering vocalization to the words long trapped in ink on a page.

Just yesterday, mid section XVI, I came across this:

Such was my country and I thought I was well

out of it, educated and domiciled in England,

though yet her name keeps ringing like a bell

in an underwater belfry.

it gives us a hold on the sentimental English

as members of a world that never was,

and partly because, Ireland is small enough

to still be thought of with a family feeling,

and because the waves are rough

that split her from a more commercial culture;

and because one feels that here, at least,

and on this tiny stage, with luck, a man

“It is self-deception, of course

there is no immunity in this island either…”

Lá Fhéile Pádraig…. The equinox is upon us!