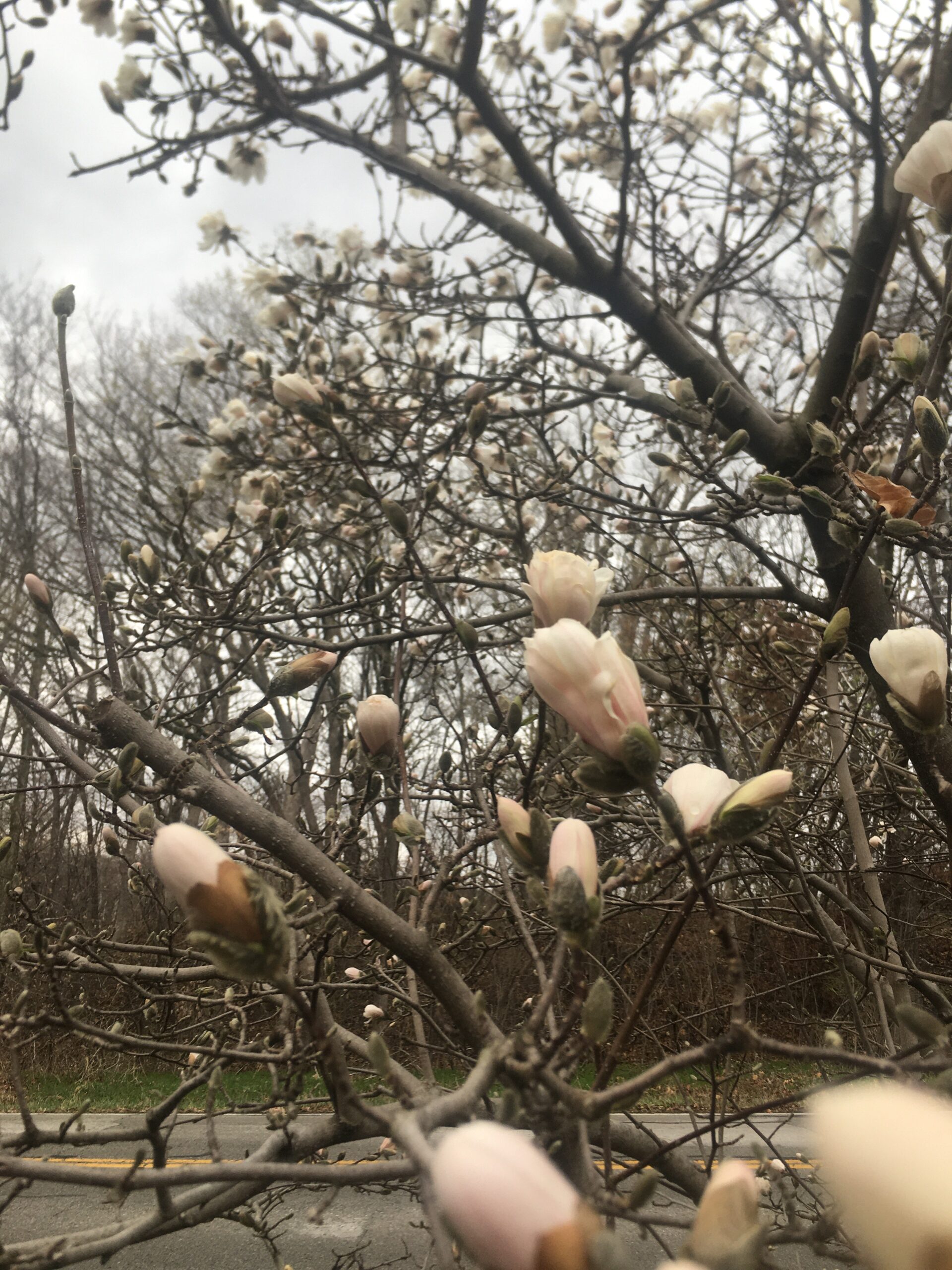 The morning was squandered, as such mornings should be, dozing in the drear light and letting my mind wander amidst the browns of the pre-spring wood that picks up just across the road.   Some kind of magnolia, riotous in fleshy blossoms, thumbs its nose at the overcast.   A rain keeps toying around the edges of the day.   The entirety of the Bjork catalogue offers its soundtrack to short-story dreams as I drift in and out, dozing in my chair.  When I finally wake for good at 1, it’s the piano works of Paul Bowles that are playing.

Spent the morning
reading second-hand Damon Runyon
anecdotes and listening
to Porter Wagoner, tinny
from the tiny speaker of my phone
From the blue, a memory: my mother
swaying in some unseen breeze,
her dress, flower-print and shapeless.
Off key, she’s humming along
in that way she had,
to the “Green Green Grass of Home…”
on her transistor radio
Even now, she doesn’t seem to note
just how threadbare her dress

Three times today, I’ve started for a walk. Each time, to be rebuffed.

The first: up early to meet friend by the pavillion that, on market days, bustles with pick-up crafts and part time farmers all looking to earn a little pocket cash.  Most days it sits empty, dozing, offering a home in its rafters to the cleverer of the birds that’ve opened gaps in the netting strung to keep them out.

This morning, it was raining, and a cold 43 degrees. I am there at the appointed hour.   But my walking companion is unreliable, and is not.  Waiting til the time has passed, he texts: “hey, I’m running late.  I should be there in 30 or so…”

He pulls this crap frequently.  I know his ways, but it sets a sour cast to the day.  And it is raining.  And it is cold.   And I head back home not having taken my walk.

My second appointment for a hike, is a standing one.   1pm on Thursdays.  Since our rekindled commitment to be out and about in the woods more, we’ve managed to hit our marks — once.   Last week, it slipped both our minds.  Today, there’s rain and cold and I’m grousy.   I waive him off.  I’m just not feeling it. We’ll give it another go. Next Thursday…

The third try is also a standing commitment.  After work, after I drop my son in the city at his mom’s, we meet at the river park.  Usually managing three or four miles, we catch up on books and the week’s happenings before heading to the Legion. Like every Thursday, it’s Trivia night.

Still, more rain.  Still the damp and cold.   We take up our seats at the bar earlier than usual. It is the barman’s birthday, and tonight there will be more food than is the usual.  Some gifts.  Probably a table of deserts. An extra pour or two.  At least it won’t be raining. Unless I step into the alley with the others as they go for a smoke.